Letter From The Chairman

Koryo Too Hot For Gaijin 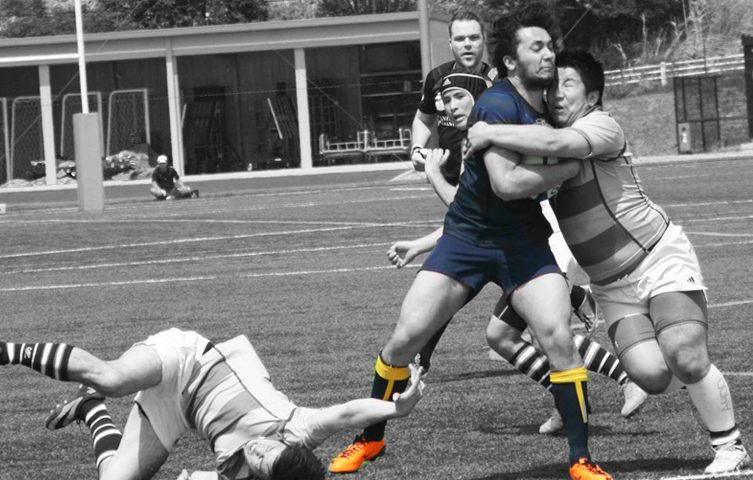 We could not have asked for a more beautiful day to play our opening round of Tokyo Cup. After a successful opening stanza to the season gaining two trophies, we were eager to get our campaign off with a bang.
The Wild Turkeys have never really given the Tokyo Gaijin much trouble in recent history, but that didn’t mean that we had to rest on our laurels, so we wanted to go out hard.

With stretches and team runs complete in the small area that we had to work with, we donned our jerseys and took to the field. After fine tuning a few things at the training grounds, the Tokyo Gaijin were eager to put things into effect during the game.

Gaijin received the first kick off, facing the sun, and took it in well, even though Wild Turkeys tried some trickery and kicked away from the forward units. Smart thinking as they knew that the larger Gaijin pack could bully their way upfield, so their intentions were clear to keep the ball away from the larger unit. It didn’t pay off as Gaijin took clean ball and set up building their game.

The first few phases showed the cracks in Turkeys’ mid-field defense which Gaijin were to expose a number of times. The first probe into this area resulted in a forward pass from the Gaijin, but Turkeys were called offside which gave the Gaijin their first real chance to bang it up field.

As Gaijin probed and tried to find the gaps, they knocked on the ball near the 22m line. The rucks were forming quick and runners were aiming for the gaps, but handling errors were evident early. Gaijin just needed to slow down and focus and bit and they’d be on their way to the try line.

The first open foray near the try line saw some great off loads and giving David his debut try as he crashed over. Even though Gaijin were in a good mood, their game was soured by a season ending injury to Paul with knee ligament damage. The first subbed was forced with Fred making his debut for Gaijin.

The second scoring opportunity for Gaijin came from broken play with the ball picked up by Tommy who was seagulling on the outside the backline. He collected the ball and drew in defenders, opening up the tram lines for Shimpei to receive a well passed ball and to make a bee line for the try zone.

Gaijin found themselves 12-nil up within 10 minutes, but Turkeys kept their wits about them and executed a turn over and forcing Gaijin to commit a penalty offence. Turkeys took the quick tap and crashed over the line to open their account to make it a game and were in the early hunt at 12-7.

Turkeys had their tails up and were wanting to build on their points. They sent a ball skyward, putting Taku under pressure with the sun in his eyes. He lost the ball in the sky and back tracked for it, but the ball bounced out. Gaijin were in a defensive line out on their 10m and secured great ball. Gaijin worked the phases up field until Paddy found acres of space and was attempting a pass was tangled up, losing the ball forward.

The scrum was turnover and Gaijin were back at it causing problems for Turkeys near their line and the eventual quick tap penalty put John over to extend the Gaijin’s lead 17-7.

Yet again, Gaijin were bullying their way to the try line with Tomo crashing over in the corner making it 22-7. Turkeys were still not going to roll over easily and made a massive break through the sloppy defense and were well on their way to score a try until Gaijin full back came from a sweeping position and went high, preventing the try. A ref that knew the rules would’ve ruled a penalty try and yellow card, but somehow only a penalty was given 5m from Gaijin line. Turkeys built the pressure and forced another penalty that was tapped quickly and they crashed over for their second score and kept in touch 22-14.

Just before the half, Gaijin had the last say with a well work line out drive that disintegrated, giving Gaijin the penalty which was taken quickly for Shimpei to get his brace.

Half time score sat at 27-14 with Gaijin in complete control. A few words of encouragement and minor adjustments made and Gaijin were ready to see off the tiring Turkeys.

Soon after kick off, Gaijin had an offensive 5m scrum which resulted in a pushover try and the score ticked over to 32-14. The passes and off loads were sticking well and communication and support came thick and fast and Gaijin began to claim real estate in Turkeys’ half. The men in grey could not exit well and ran out of ideas to get out. Gaijin continued to press with another try, taking the score to 39-14.

From this point the scores came thick and fast with Turkeys unable to stop the rampaging men in blue and gold. One of the highlights was when Paddy kicked long from behind his 22m and the ball managed to roll dead beyond the opposite dead ball line, causing a scrum way back to the kick origin. The Gaijin forced the turnover and Taku found himself on a massive break down the line. He had 60m to make with a fast chasing sweeper. Even from the sidelines, we were yelling to him to back himself, and so he did with a direct run to the corner. At this point the score was 60-14.

The Gaijin were enjoying this game as every player was smashing into the Turkeys with joy and determination. Even lifetime stalwart, Joffa Harris shook off the cobwebs in the XV format and had some blistering runs and a broken finger for his efforts. The last 20 minutes were open play and fast moving Gaijin sending the final score close to a point a minute with the final tally at 75-14.

Without a doubt, this is the easiest game of the Tokyo Cup and it’ll only get more difficult from here on in, but it was a good opening round to build the confidence.

Onto the next with Koryo in round two, which is a much more difficult opponent to take on.

Thank you to Hideki Man for taking a bunch of great photos, full gallery here 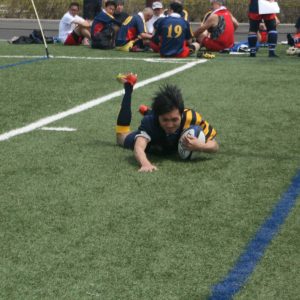 Shimpei Yamaguchi slides in for a try 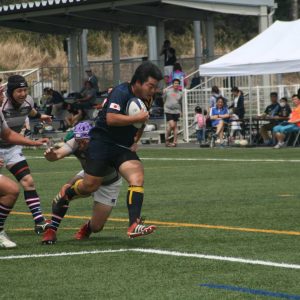 Tommy goes for the gap 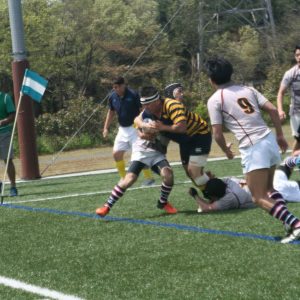 Tomohiro Setoguchi powers over the line 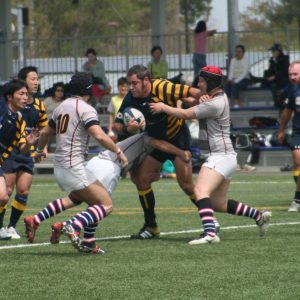 Gorka Gerediaga on a thundering run 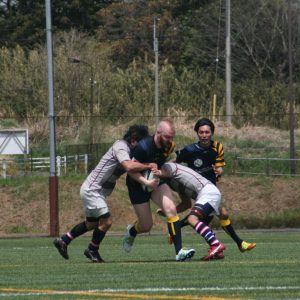 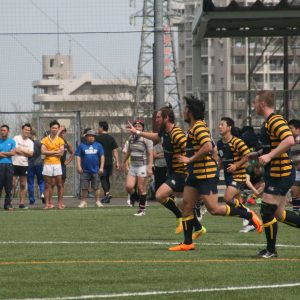 The gaijin defence is set