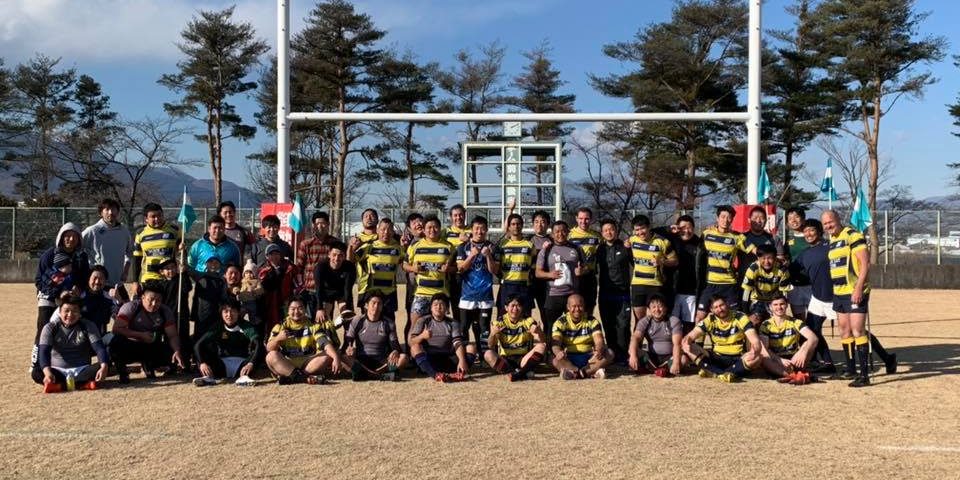 The Tokyo Gaijin RFC started their 2019 season with a Tour out to Yamanashi to play in a three-way ‘friendly’ tournament against Aloha RFC and Ashitaka RFC. The Gaijin have been heading out to Yamanashi at least once a year for about 5 years now. The picturesque surroundings of Midai Minami Park, with views of Mt. Fuji and the surrounding Japanese Alps, the beers put on by the opposition post-game, the onsen stop on the way back, and the ‘colourful’ bus trip back home make the trip a highlight of the year.

The Tokyo Gaijin all congregated at Shinjuku Center Building at 8am and most were on time. A late entry of club chairman Tommy Nasuno, a new guy in Arun Kumar and Yohei Iwamizu meeting the boys out at our destination meant we had a ‘skinny’ squad of 17, but two reserves was all we needed to get the show on the road. Arun Kumar, from India, had never played the game before but with the small squad he was sure to get game time. Two and a bit hours later we were out at Midai Minami park and the weather Gods had put on some fine weather for rugby. There followed three ‘thirds’ of 30 minutes.

The first game was between Aloha RFC and Ashitaka RFC. Scores are not available but Aloha RFC won easily.

Next it was Tokyo Gaijin RFC up against Aloha RFC. The Gaijin blew the kickoff through miscommunication which wasn’t the start to 2019 we were looking for. Five minutes and 3 penalties later the Aloha No.6 rolled off a lineout maul and scored. The successful conversion made the score 7 v 0 to Aloha RFC.

Aloha scored again in the 11th min with a move which started with a break in their own half followed by one quick ruck. Some more strong runs was finished off with their fullback (later their MVP for the day) running 30 metres but getting caught 5 metres short. One of their props trailing behind picked up the ball and barged over just inside the touch line. The conversion from the sideline was a beauty and Aloha RFC now led 14 v 0.

In the 16th minute Louie Hamilton scored for the Gaijin. It was preceded by a good kick downfield by Kouichi Morita who managed to win the ball back, gaining the Gaijin 40 metres. Not long after that some good hands and quick recycling saw the ball go left and Hamilton swerved around the last defender to run the last 10 metres to score, with about 4 support players with him and not an Aloha player in sight. Youhei Iwamizu missed the drop kick leaving the score at 14 v 5.

The Gaijin made the score closer yet in the 22nd minute when Youichi Morita snuck away from a ruck 7 metres out out went over untouched. Yohei Iwamizu converted to make the score 14 v 12.

In the 24th minute the Gaijin were in again but the referee was correct in adjudging the tryscorer, Masato Fujita, to be in front of Alex Auldy when he kicked ahead to the corner.

In the 27th minute Aloha No12. scored in right corner after their fullback had got them into a good position from defense to attack. Once again their No.9 converted from the sideline.

The final third of the match was Tokyo Gaijin RFC V Ashitaka RFC.

The game started with a lot of penalties, mostly for high tackles (yes, the ref was strict with the new nipple rule!) and rucks infringements.

There was almost 4 minutes before the Gaijin got out of their own half. A Joffa Harris kick from just outside the Gaijin 22 ending up dribbling all the way to the Aloha 22 where Touch Roy was just beaten to the ball after a good chase. Ashitaka RFC bashed it back to halfway and then kicked, but some good runs and quick ruck work by the Gaijin allowed flanker Tom McCullough to make good yards down the left flank. He passed on to Kouichi Morita who then returned the pass back inside to McCullough, who then fended off the last defender, and ran the last 20 metres to the line and then around under the posts to score. Daisuke Teraoka converted to give them a 7 v 0 lead..

After a long period on their own line a quick penalty tap saw Yohei Iwamizu race 70 metres for the Gaijin before the defense reined him in. He passed on to Louie Hamilton who swerved a few times, and then on to David McElhinney, who was caught 5 metres short. It looked like a try for all money (and should have been) but good scramble defense saved the day. All the forwards had to start running to catch up with the play as they probably thought they may as well be ready for the following kickoff. From the  ruck that followed McElhinney’s tackle Ashitaka RFC won a ruck penalty. The Gaijin were then marched 10 metres for kicking the ball away.

Near the end of the ‘third’ a beautiful little behind-the-back pass from Gorka Gerediaga saw Natsuhiko Kunitomo steam upfield on a 20 metre run. He nearly threw an intercept but it was knocked down earning the Gaijin a penalty. A quick tap and charge from Tommy Nasuno made 10 metres. Another ruck penalty followed and another quick tap, this time from Dave McElhinney, was sent onto Gorka Gerediaga and Louie Hamilton finished it off by running into a hole and scoring under the posts. Daisuke Teraoka converted to make the final score 14 v 0.

The Tokyo Gaijin RFC won one and lost one but were happy with their overall score of 26 points to 21…that’s a win. Yohei Iwamizu was voted Man of the Match by the opposition players as he had made some lengthy breaks during the game and was solid in defense at the back.

The Gaijin enjoyed a few beers with their opponents, a few birthday boys had to shoot the boot, and then it was on to an onsen, and then drinking games on the bus journey home. Good times! 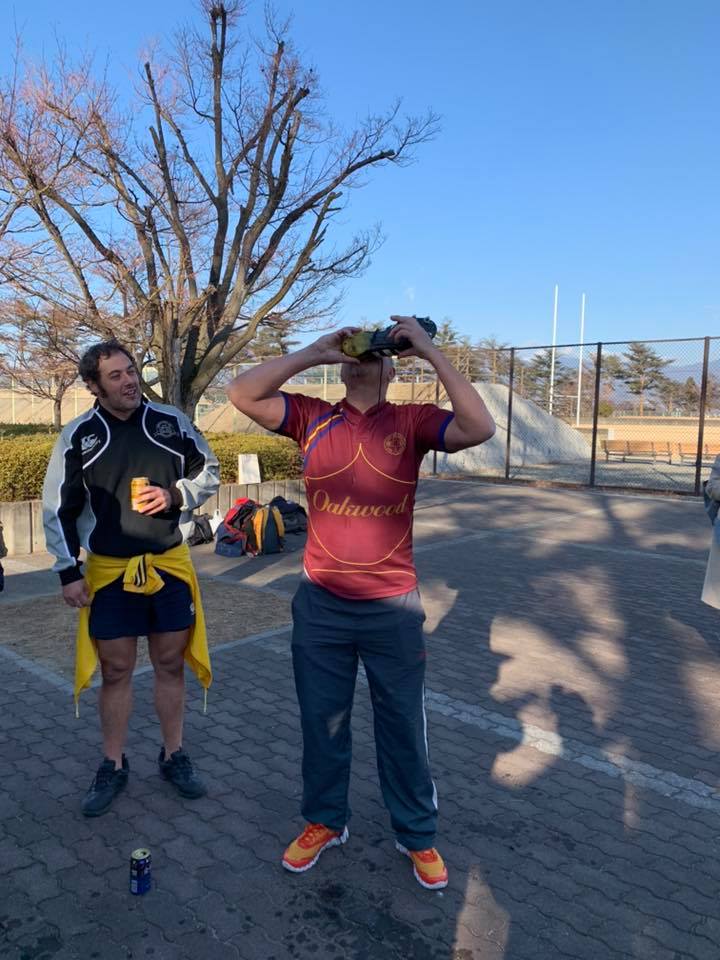