According to the Daily Yo' this morning, May 10 was officially the hottest day of 2009 thus far across Japan. Across the Kanto Plains we had zero cloud cover, a fair amount of humidity and roaring Spring temperatures reaching 28.5 °C in the shade. Out on the Musashi University training ground it is fair to say that temperatures must have been well beyond 30 °C (86 °F) with the heat radiating from the dry dirt track (not a speck of grass on the entire field). You wouldn't have known the conditions to be "difficult" though, if you were watching the Musashi University 1st XV, that is. They were young, fit and fired up.

According to the Daily Yo’ this morning, May 10 was officially the hottest day of 2009 thus far across Japan. Across the Kanto Plains we had zero cloud cover, a fair amount of humidity and roaring Spring temperatures reaching 28.5 °C in the shade. Out on the Musashi University training ground it is fair to say that temperatures must have been well beyond 30 °C (86 °F) with the heat radiating from the dry dirt track (not a speck of grass on the entire field). You wouldn’t have known the conditions to be “difficult” though, if you were watching the Musashi University 1st XV, that is. They were young, fit and fired up. 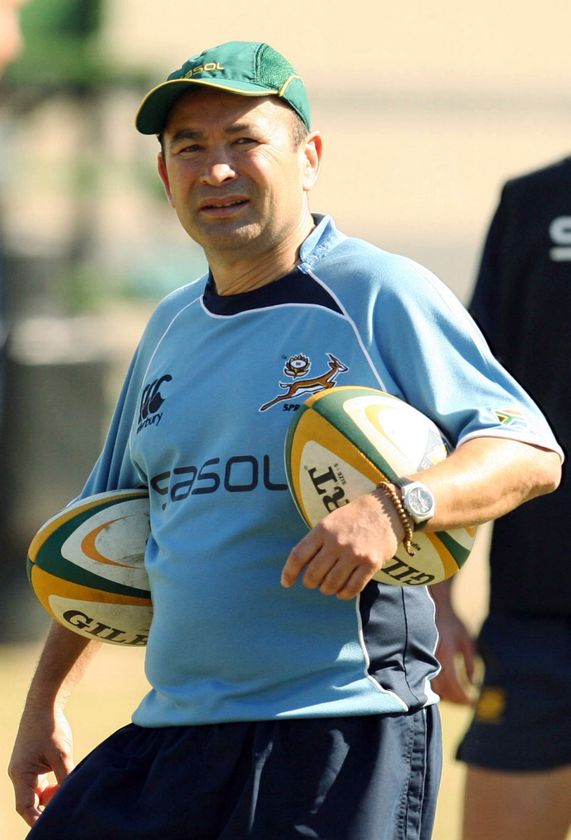 If you took a look at the Tokyo Gaijin on the other hand – as former Australian Coach, World Cup winning Springbok Assistant Coach and Suntory Advisor Eddie Jones was – you would have noticed a distinct lack of ability to cope. That is, cope with weather better suited to water-skiing or even camel riding (or whatever they do in the desert). Eddie Jones was providing some tips to Musashi University Rugby Club as they seek to improve their game and work their way up from Tier-3 of the Japan Univeristy competition. Tokyo Gaijin members (Akira Asada and Jeff Takahashi) who work for Suntory RFC set up the match to provide Musashi with a test following a 4 day training camp. The Gaijin could have done with a few pointers from the coaching legend as the first half of the match was amazingly one-sided, in favour of the young, fit fella’s.

With a typically late arrival, no warm-up of any shape or form and a lot of new combinations in the starting XV, the Gaijin – most with hands on hips – puffy, red faces heaving for oxygen and falling off tackles left right and center – were not making much of what ball they got. Some of the forwards were putting their hands up, including the front rowers Chris Lucas, Chris Fearon and Rob Poulton (Game Captain), while Toby Gallagher and Takeshi Ochiai were consistent as ever in the role of link players (flankers!), with big Welshman Rich O’Shea and Gallagher winning solid line out ball. Rory Brown (a South African keen to impress) was a force in maintaining the forward’s direction when they had chances to use their pick and go – which appeared our only weapon of effect through the first half. Akira Asada at flyhalf was strong on attack, showing a great fake and fend to get his guys on the front foot, and was smart and accurate with his kicking from hand; while Tsumugi Akiba was strong with ball in hand and busy as ever making tackles in the centers.

Communication (lack of) was blamed at the half as not enough forwards were spreading beyond the ruck and with Musashi throwing the ball wide at every chance. Wingers Charles Joffre and Yoshi Sato were out numbered, despite their best efforts and some good committed tackles there were simply too many people running at them to defend; while Ikuo Fukuda – normally a center or wing – was also under constant pressure under the high ball, also being over-run by swarming Musashi backs. Those Musashi backs ran in 5 tries in the first half to take a lead of 31 points to nil.

It was all quite embarrassing for spectators and Mr. Jones made a sly joke from the sideline as the score line looked to explode (like a Gaijin waistline over Xmas?). Enough said. It was a shambles and fitness was clearly such a massive factor. Pride was the center-piece of the half-time discussion (though as most of the lads were standing around sucking on water bottles with glazed over eyes, I wasn’t sure if anyone was really listening), so replacements were made.

On came regular 1st XV members, Sean O’Donoghue and Paulo Berriozabal to the second and back row, respectively. Blake Walker switched to his more comfortable role at fullback and our potent weapon Bati Apisai came in to inside center. Jeff Takahashi came on to the wing also as others tired. Would they be able to add the much needed go forward that had come only in dribs and drabs thus far?

From the very outset the new combinations were a big hit. The added experience saw more players picking and going, with more players in support, winning quicker ball at the breakdowns. Within 3-4 minutes the Gaijin had run in a try to Aki after a bullocking run by Paulo. Mauro Sauco was also added to the play and made some solid hit ups, showing a matured approach as he immediately looked for support around him (rather than making unwise passes or spilling the ball as he may have done in years past). It was Paulo though off the back of a maul who spun through several tacklers and charged up field, he was able to offload to Aki who still had a lot of work to break through a tackle and to contain the ball while in the tackle of a desperate Musashi defense. 5-31.

The next try came after a deep kick by Musashi went into the hands of utility forward Sean O’Donoghue who caught the ball outside his 22 by the right touch line. He caught, paused (contemplating how hot it was?), then took off at pace to smash through the on-rushing defense and surge up over the half way line. Offloading nicely to team mates, it was then Bati’s turn to show his class, zigging and zagging through defenders to take the ball over the 22. Bati had also been a feature of our defense (as had Paulo in particular, but also Chris Feron who made some bruising clean outs). It was Bati at his best, stealing the ball on several occasions and shutting down the Musashi attack that had been rampant through the first half, and on attack bamboozling the young students with his stepping and strong hand-off.

At the back, Blake Walker was also showing great field positioning to control the deep kicks and Jeff Takahashi showed some brilliant commitment and speed to shut down a two on one attack by Musashi. Bati though was the impact player on attack and his combination with Asada-san and Aki was brilliant, including give and go moves with Bati doubling round to break through a confused defense. The forwards would be involved as Aki supported and brought the ball back to the linking Toby Gallagher, Rich O’Shea or Sean O’Donnaghue. The second try was scored by Bati himself on yet another line break by the Fijian flyer and the Gaijin were confident, as Mushashi were confused. What had happened to the plodding, mistake ridden Gaijin of the first half?

Of course, it was not so one-sided that the Gaijin would catch Musashi but there was only the one team in the second half: the Tokyo Gaijin. We dominated territory (some great kicking by Asada-san), possession (solid set pieces and great support work by the forwards and centers) and the score line. The Gaijin ran in three tries to none, with the final one again being scored by Aki from another big burst by Paulo Berriozabal. It must be said that Rory Brown was a key figure at half back with good option taking, knowing when to urge the forwards to bruise on, when to take the ball himself and when to release to his backs or forward bruisers.

There was some very good rugby in the second half and pride was at least restored with the final score remaining 31 for Musashi but the Gaijin putting on 17. The new combinations that started that match will take time to gel, though work on individual fitness would be a huge step in the right direction. This was a day for some of the old heads, including those key replacements who came on at the half.

Following the match a few of the lads chatted with Eddie Jones and we headed off for a barbecue and beverages. Thanks to all those who supported (wives, girlfriends and kids) and to Jeff, Asada-san and Jesse for arranging the match. Also thanks to Bati, Mauro and Jesse for their effort in cooking in the extreme heat and of course a thanks to our hosts who let us use the barbecue area post-match. Finally, a welcome was extended to newcomers Chris Smith (England) and Dave Richards (Wales) who both showed they will be fine additions to the club.

Man of Match: Akira Asada and Tsumugi Akiba (joint award for consistently positive play and for staying on the full match in sizzling conditions)