After the 7's win

It’s that time of year again, where we Gaijin take a long ride into the mountains of Nagano to frolic amongst some of the best Rugby pitches that Japan has to offer.  Compared to last year the numbers of participants have shrunk, but that didn’t matter to anyone who was looking forward to weekend ahead.

As always the weekend started with the grueling 07:30 meeting time to take the bus to Sugadaira.  Unlike last year though, the weather was on our side as there was not a cloud in the sky, making the bus ride up more bearable with the picturesque scenery of the Japanese countryside.  Once we got in, everyone had the opportunity to shop around the multiple Rugby Shops with stupendous discounts.  Soon after, the Gaijin participated in a 7’s tournament.  Considering how most of the time (99% of the time), we play an heavily forwards orientated game whether it be 15’s or 7’s, it was phenomenal how we were able to dominate all the opposition, scoring 40+ points in a period of 14 minutes for all games through with speed rather than size.  The most notable opponent were the Nagano 7’s team, who come up to Sugadaira only to play 7’s.  After winning the tournament, we were indulged in the great hospitality of the tournament committee during the opening party with All-You-Can-Eat and Drink.  Also as tradition there was a raffle of Sugadaira’s famous lettuce and other presents.  This was our lucky year as Tomo was able to pinch the grand prize, with Fred winning Sunwolves merch and Toma winning a case of lettuce.  With the party over, we headed back to the hotel to continue drinking to the early hours playing 21 and the savagely unforgiving Cards Against Humanity.  Special note goes to Kashi who was constantly targeted through-out the game of 21 and was able to wake up the next morning at 05:30 for a walk.

The next morning, majority of us were feeling like we’ve aged 30 years due to the antics of the night before.  However, we had the duty of attending the opening ceremony and give a speech on behalf of the players.  Fred was kind enough to give the speech on behalf of the players, in German of course, which not a single soul understood.  Lucky for us, no one interpreted the speech as a declaration of war and saw the comedic value in it.  If you haven’t seen the speech, I highly recommend watching it in the link below.  Our match opposition for the day was TRC Bebop from Gunma Prefecture.  They gave us a great challenge but unfortunately for them, we were riding the momentum from the day before and won heftily. Notable mentions go to the backline, who were constantly pressuring them offensively and the team’s solid defense, rarely giving the opposition a chance to breathe and not giving them space to work with.  Notable tries came from Toma who with his dashing pace out-ran and stepped through multiple defenders.  Also our “German Dictator”, Fred, who didn’t give up to the last minute and scored a try off a 60m run, breaking through couple of defenders on the way.  Goat goes to me, Tommy, who for the first time received a yellow card as a Gaijin, in which I will not deny I am guilty of high tackling in order to prevent a try.  With our time in Sugadaira coming to a close, we headed for the Onsen to heal our aching bodies, and went on our way back home, of course with several of us drinking all the way.

This year’s Sugadaira has been very special for some as it may have been their last with John leaving for Singapore, Fred going back to the Motherland, and Asako moving to France.  For us who are still around, this has given us more memories of the sacred rugby ground and more reason to come back again next year.  I think we can all say that this tour has been a great success and I hope that we can take this performance into the Shuto League in two months time where we hope to win.

I want to give a big thanks to Sato-san, Tomo, Souta and Gorka for organizing the trip.  Also thank you to the supporters; Iwasaki family, Sato family and Asako.  Big thanks go to our sponsors for their financial support; Nasnos and Tesoro International School.  Lastly the players, if it weren’t for you guys, there would be no laughter and joy, no victories, no Sugadaira.  Hopefully next year we can get more numbers to share this unique experience with again. 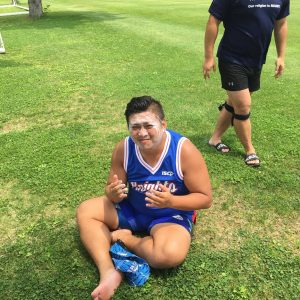 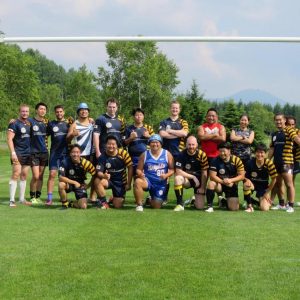 After the 7’s win 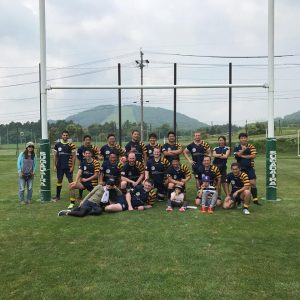 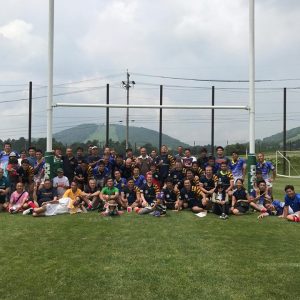 Both teams under the posts 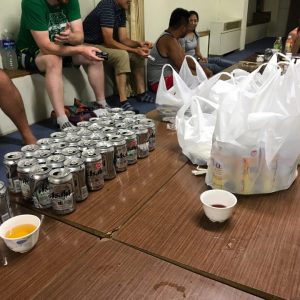 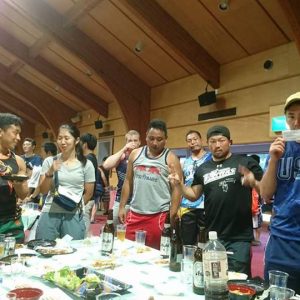 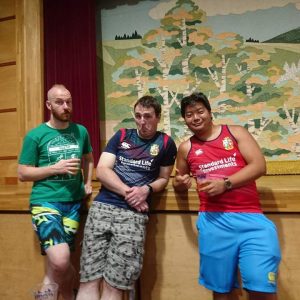 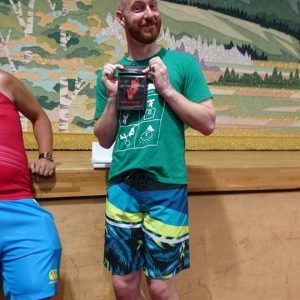 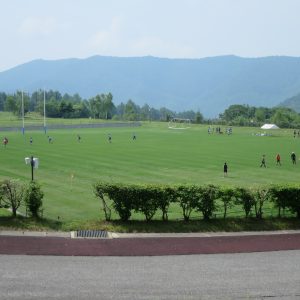 Beautiful field in the mountains