Around 50 Tokyo Gaijin RFC players, family and friends gathered at Ebisu Garden Place Beer Station to recognize the special achievements of 2017, celebrate Christmas, and tell tall stories about their individual performances (both on and off the field) of 2017. Travis Drury won the prestigious Most Valuable Player award and Patrick “Paddy” Watson scooped up 3 awards on the night. 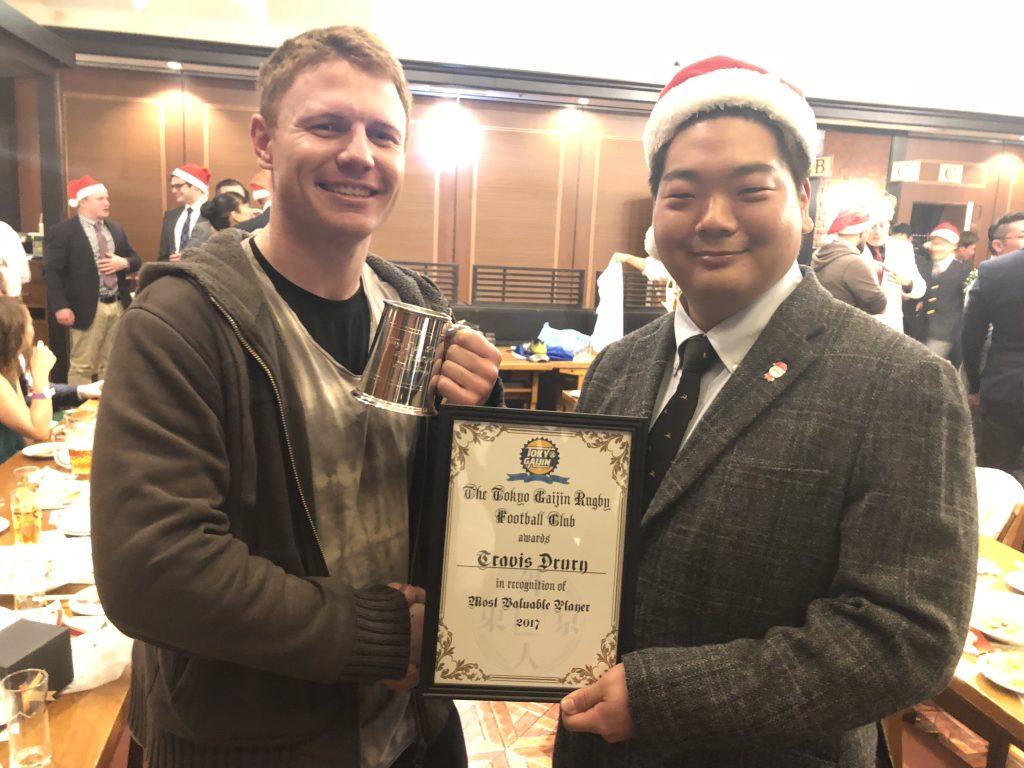 This award is the top of the top, the crème de la crème, and is a much coveted award voted on by all TGRFC players. Fullback and occasional centre Travis Drury was recognized for his superior on-field contributions by his peers after many “Man of the Match” performances throughout the year. Not only was Travis solid as a rock in the last line of defense but he also made many breaks cutting into the backline and found his way over the chalk for numerous tries. A well-deserved award for a fantastic year on the field!

This award is also voted on by all the players. Standoff Paddy Watson played consistently good rugby throughout 2017 to capture the MVP Runner-up award. His booming boot in general play and goal kicking were valuable assets for the TGRFC all through the year. He also led the backline superbly and was a valuable link between forwards and backs and managed to top the try scoring list.

Paddy Watson was the top try scorer of 2017 with 9 tries.

Paddy was the team’s go-to goal kicker and converted 27/35 goals and 2 drop goals. (NB: Some statistics from “friendly” matches may be missing here due to shoddy book keeping).

The two props were recognized for their consistency throughout the year with a total of 13 caps.

Paul and Natsu were recognized for their contribution to the TGRFC off the field, with the pair taking on frequent team duties.

There were also some fun awards given out, most of them not being highly aspired to.

Nate received a red card in the first two minutes of his first game for the Gaijin – and it was an important game. Luckily for Nate he returned to play an important part in winning that game.

Gorka chose not to play the spring season Shuto League on a matter of principle after one of his team mates was banned from playing in the 2018 Shuto 10’s after what we shall euphemistically call the “garbage incident”. The whole matter was a farce and fair play to Gorka for sticking to his guns.

Irishman Peter Calvert managed to lose his bag somewhere on the Tokyo train system after his first game with the Gaijin. He also missed the important game against Nerima RFC while sleeping off a hangover after a night of merriment with the amber ale.

Awarded to Joffa Harris for his frequent contributions to the team’s website.

Awarded to Alex for his complete overhaul and maintenance of the team’s website and Facebook page – a job well done!

Awarded to Tommy for aggressively getting new sponsors to fork out cash for the team (using his underworld connections of course!) 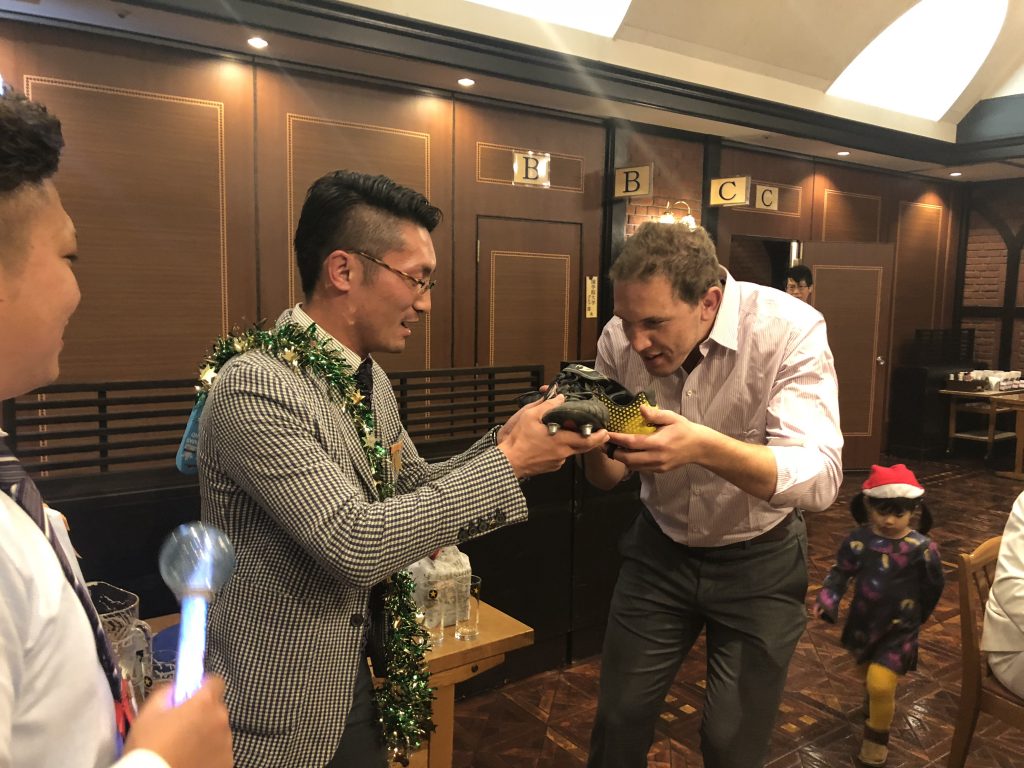 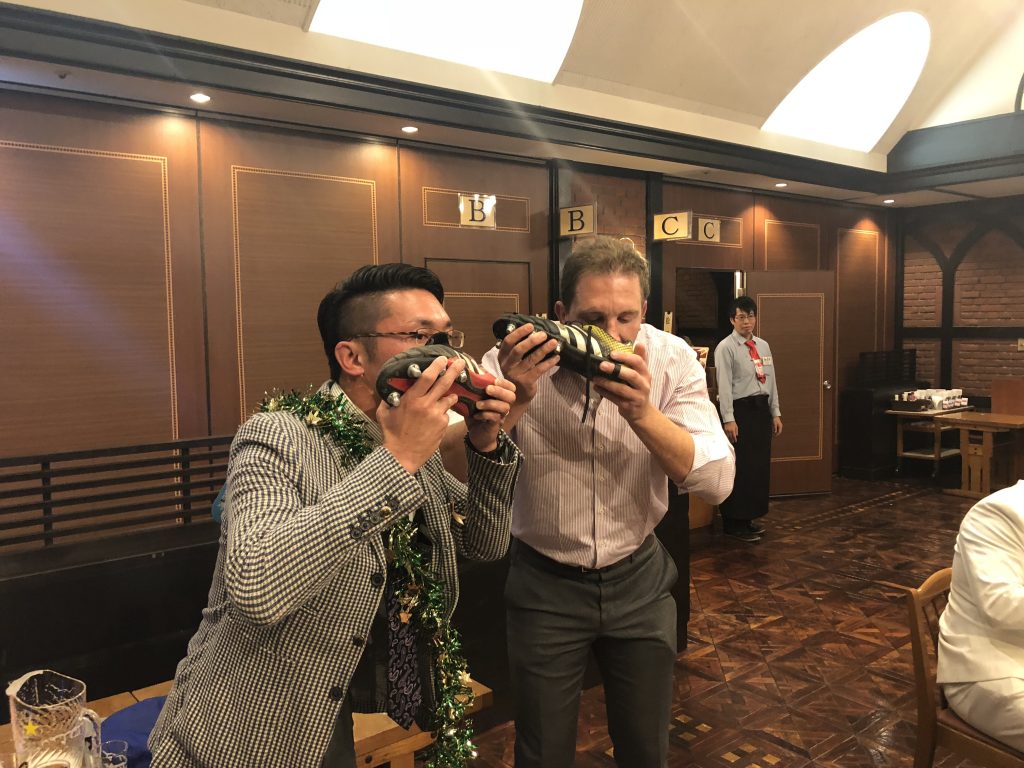 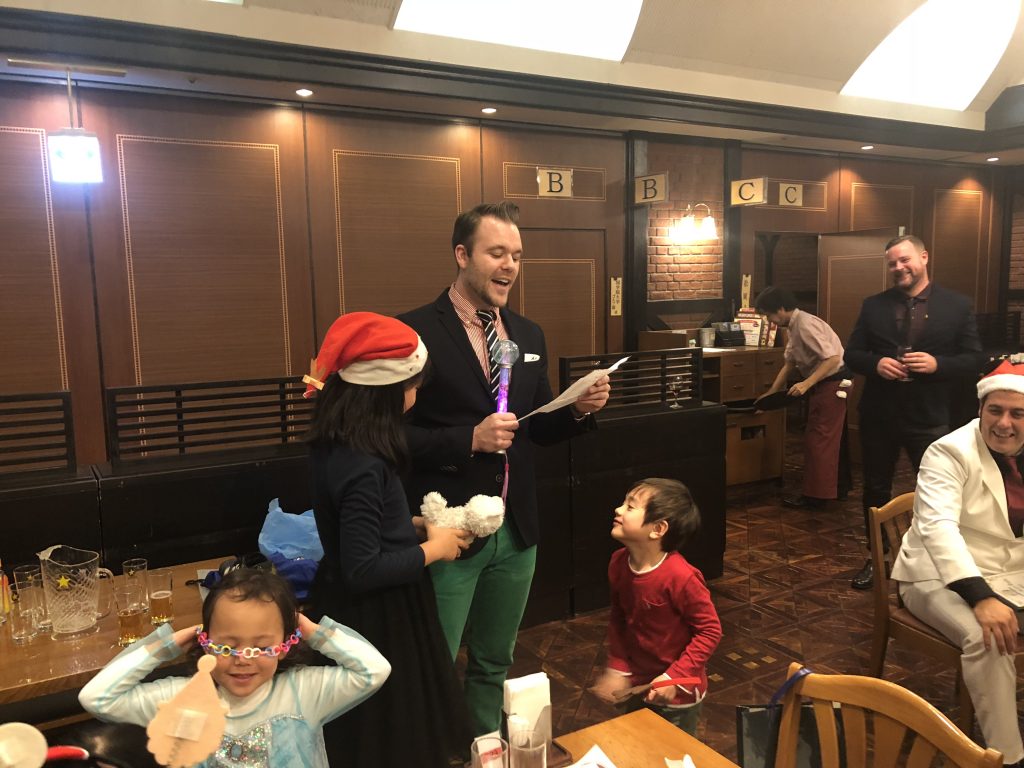 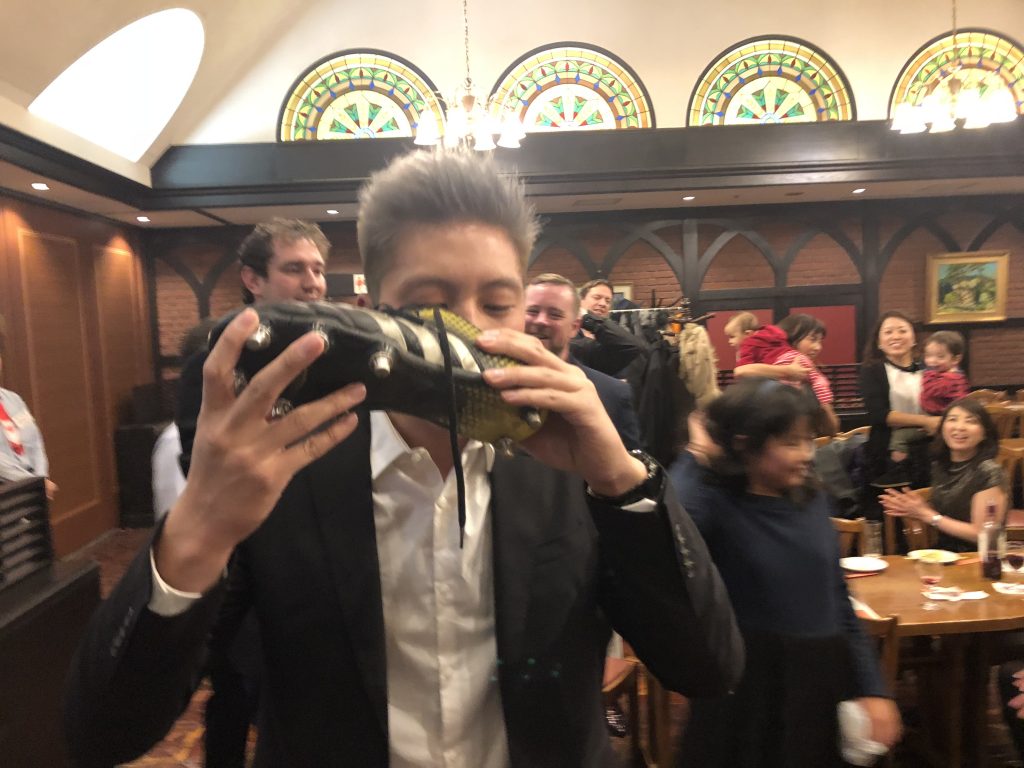 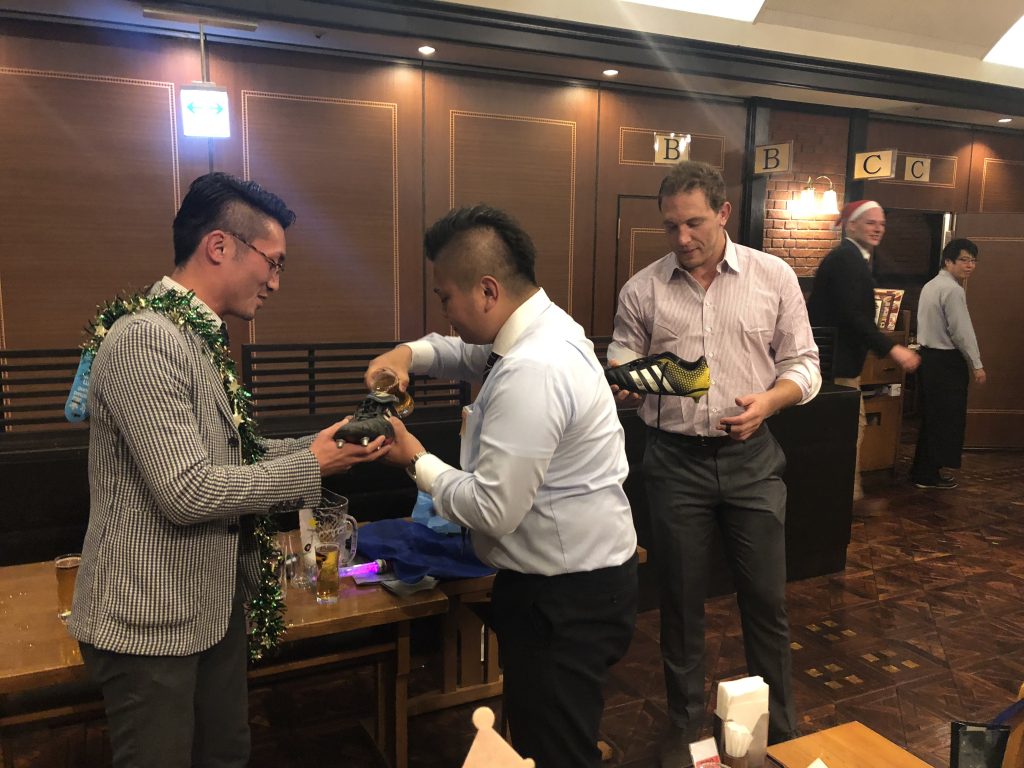 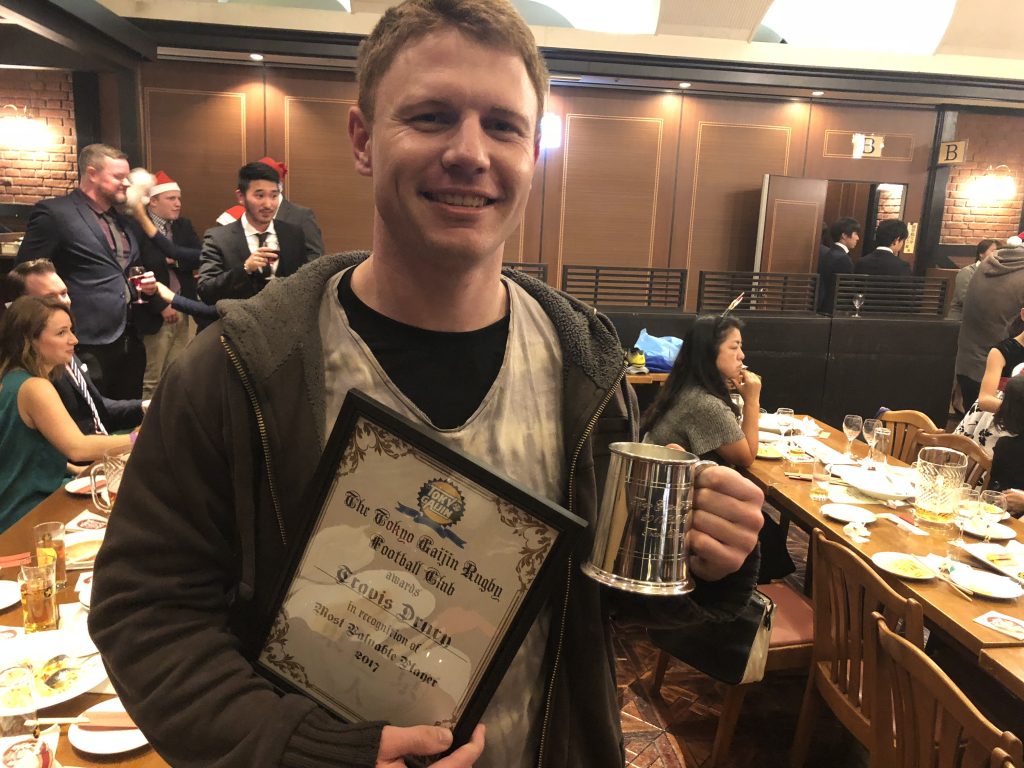