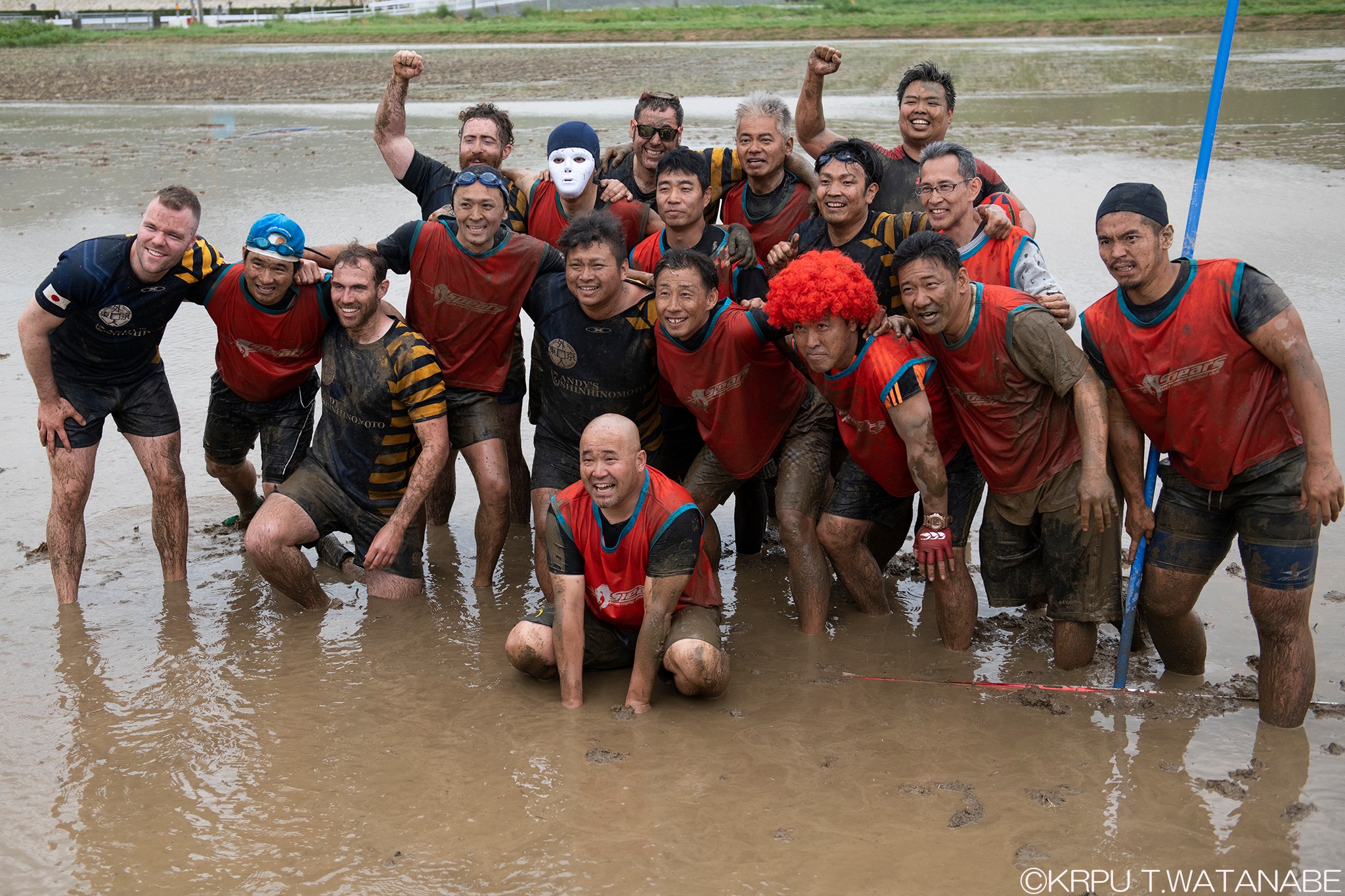 On the weekend of May 16th/17th, the Gaijin took a small squad down to the annual Fukuchiyama Tambo mud rugby tournament. The bizarre fellowship—12-strong in all—was comprised of club veterans, fair weather players, a few modern greats and a certain hungry Chairman.

I will tell this sordid tale from my own perspective, as best I can – admittedly it was not my finest weekend in a Gaijin shirt. After what seemed like a 12-hour drive along the southbound highways of mainland Honshu on Saturday morning, our Gaijin cohort rolled up to the doors of a rickety, weather-beaten, but rather fetching little home in the anonymous rural expanses of Kyoto Prefecture. This would serve as HQ for Saturday evening’s festivities.

The festivities came in the form of a splendid smorgasbord of barbecued cuisine; a cross-cultural Chinese-Australian grilled fusion, a la Chairman Tommy and Roy Tachi. This was washed down with a bale-full of Super Drys and a dessert of local nihonshu. The merriments went long into the night.

On Sunday morning, the boys were lumbering dolefully around the tatami floorboards with the zest and enthusiasm of zombies. I was found face-first on the floor of a room hidden within a room, a mouth like sandpaper and a head like a pneumatic drill. Tambo rugby was going to be a long day.

Eventually we loaded ourselves into the car and, with Muz Clarke behind the wheel, we snaked our way through the undulating profile of endless green that is the Japanese wilderness. It was a scenic enough drive that I could actually feel my hangover slowly eek away—or so I thought.

At around 10am, we pulled up to the Fukuchiyama rice paddies where the Tambo mud rugby tournament would take place. The setting was spectacular, the atmosphere was bouncing, the water which logged the playing fields was surprisingly agreeable; what more could one ask for on a fresh spring morning?

Then seemingly out of the blue, back came my hangover with a level of vociferousness and aggression which I have not experienced for many a year. Not long after this untimely revelation I was turned upside down into the mud following the end of the obscenely long Tambo opening ceremony; this probably didn’t help my rapidly deteriorating condition—or so I’d wager.

Now, a quick footnote on what exactly Tambo rugby is. Basically, a rice paddy field is flooded with muddy water, upon which two teams of four will play a 5-minute game of touch rugby. One point is awarded for a try, two for a try with a dive over the line and an extra point if you can manage to convert the ball over the portable bamboo uprights. Believe me it’s far more strenuous that it sounds.

From here, things went south for me.

I spent most of the morning and early afternoon lurching uncontrollably from one pile of ever-increasing vomit to the other, while the Bench Heroes and Chicken legs chalked up a slew of victories in the opening group stages of the tournament. It seemed like they were having fun no doubt, but with much of the day spent in the foetal position it was hard for me to properly gauge.

At around 3pm on a sudden burst of whimsy, I decided that I did not come all the way down to the arse-end of nowhere to lay pathetically on the ground while everyone else played their part on the field. By the time I joined the boys, the Chicken Legs were going into the final game of the group hoping to make it three wins from three.

A stellar performance all round in the final group game for both teams, saw the Chicken Legs and Bench Heroes progress to the quarter-final knockout stages. Shortly after, the Bench Heroes successfully negotiated their way to the semi-finals with a strong performance, including a try from the no-longer M.I.A Fijian, Mosese “Mojee” Rarasea.

Unfortunately, our Chicken legs did not fair so well. Leading by one point—a rampaging breakaway try from Tom McCullough—some shocking defence saw the opposition cut right through the defensive line unscathed. They would successfully convert the try in what was the last play of the game, sending the Chicken Legs home with our tails between our legs, so to speak.

With the prospect of the customary post-Tambo onsen on the horizon, I sense that everyone was quite pleased to see the same opposition that knocked out the Chicken Legs, dispose of the Bench Heroes in the semi-finals. I think if you’d listened closely enough, you may even have the heard the collective sigh of relief. And so we come to the end of the tale.

On a personal note, it was a pathetic morning followed by a slight—albeit overdue—recovery that helped me regain some of my lost dignity. On a team note, it was a great tour with an unfortunate ending on the field. But like Arnold Schwarzenegger once quipped, we’ll be back. Tambo rugby isn’t going anywhere, and neither are the Gaijin.

Go on you good thing!